Last weekend, I participated in a super fun event to celebrate the release of Season 3 of Dawn of the Croods on Netflix. Starting last year, I have had the immense honor of working on this hilarious show! The event was held at the comic/coffee shop The Perky Nerd in Burbank, and included a live table read of one of our scripts by our illustrious voice cast...as well as a live drawing demo done by yours truly and some of my insanely talented fellow crew members! All of them are so inspiring, to be able to take part in this celebration alongside them for the first show that I've worked on as a Storyboard Revisionist, was such a special moment for me!! 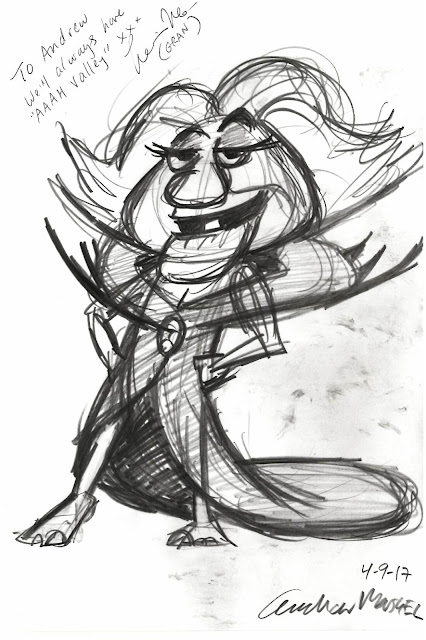 For my portion of the drawing demo, I chose to draw my absolute favorite Crood - the sassy and self-assured Gran! I was thinking, if there were a big fancy Hollywood red carpet premiere for Dawn of the Croods, what (or who) would Gran wear?! The answer that I came up with was this elegant gown made from the fur of a Bear Owl...but no need to worry pre-historic PETA, no Bear Owls were harmed in the making of this dress (I'm pretty sure). To tie the look all together, Gran is also rocking a broach lent to her by my other favorite Croods character, Amber. That's right, that broach is actually Amber's eye patch...but Gran promised to return it as soon as the premiere is over. "Amber need that back!"

Once my drawing demo was done, I was able to meet Laraine Newman, the voice of both Gran AND Amber (that's right, she voices my two favorite characters)! She was one of the original cast members on Saturday Night Live, and has had a legendary career in comedy ever since. She was incredibly nice, and was sweet enough to sign my drawing of Gran!

Our drawing demos were streamed on Facebook Live, but it can be played back below. Unfortunately there were some technical glitches, so the video cuts out at around 12:00 and then comes back on at around 22:30. What can you do, that's live TV...er, Facebook for ya!


And you can see the table read with Laraine Newman and the other fantastic cast memebers below. They're being led by our incomparable Executive Producer, Brendan Hay.

Andrew Marshel
I hail from Walnut Creek, CA and lived amongst the wonders of Northern California until I moved to sunny LA in 2004 to receive my BA in Animation and Digital Arts at USC. I still reside in my beloved LA and intend to live, play and work here as a Storyboard Artist for Animation until the end of time. I am currently working as a Storyboard Artist at DreamWorks Animation.